In 2011 - 1st Place in Class at the Tanglewood British Motorcar Festival, Lenox, MA. 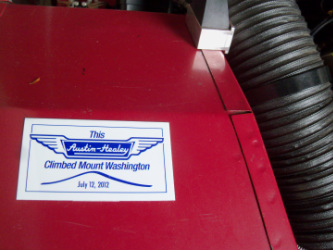 It is the original color, Cherry red. It has been carefully kept original in every detail, when possible. It has the original 948 motor and smooth-case tranny. The motor is rebuilt, with brand new carbs. The tranny is original. It has all new drum brake components which work perfectly. The interior has been renewed in every way. It has the original ribbed rubber door inserts and correct door panels. The red carpeting is new in 2013. The convertible top is a new Robbins top. The new tonneau was custom ordered red, which looks outstanding. The side curtains are polished original frames with new plexi windows and rubber seals. The tires are new 155/13s. All the shocks, links and steering components are new as well as the exhaust. The horn, starter and generator were renewed in 2011.

My Wife and I drove it from CT to New Hampshire and to the top of Mt. Washington in July of 2012, with the Austin Healey Club of America. It ran perfectly to the top and back. While we were in NH, we got a 1st place award at the AHCA Car Show in Jackson, NH.


In the last 3 years, It has won 1st place at just about every car show she has been entered. It has been accepted and displayed at Lime Rock Vintage Concours twice. Has Won at The British Invasion in Stow VT, the British By the Sea in Harkness, CT and the Berkshire Classic Motorcar show in MA.

This is a slide show from that weekend in Lenox, MA. Check it out...

The new paint is very excellent quality. It is smooth and there are no ripples. This is partially because it was a very nice original car to begin with. The Engine Compartment has not been repainted. The floors are original. The weld spots in the wheel arches and door frames show as original. This body has not been fooled with. The doors and the hood line up nice.
This car is a great candidate for a National Concours competition. It would score well. I have a copy of the Concours Guidelines and have made sure to follow.